This page contains a list of the greatest Danish Soccer Players. The pantheon dataset contains 16,923 Soccer Players, 165 of which were born in Denmark. This makes Denmark the birth place of the 17th most number of Soccer Players behind United States and Croatia. 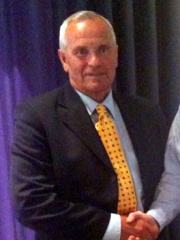 With an HPI of 71.94, Richard Møller Nielsen is the most famous Danish Soccer Player.  His biography has been translated into 30 different languages on wikipedia.

Richard Møller Nielsen (19 August 1937 – 13 February 2014) was a Danish football player and manager. He coached the Denmark national football team that won the UEFA Euro 1992 tournament. In 1995, he was awarded a gold version of the Medal of Merit. He was the father of Tommy Møller Nielsen. 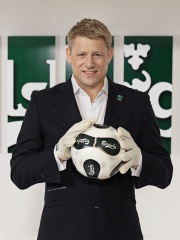 With an HPI of 69.74, Peter Schmeichel is the 2nd most famous Danish Soccer Player.  His biography has been translated into 58 different languages.

Peter Bolesław Schmeichel (Danish pronunciation: [ˈpʰe̝ˀtɐ ˈsmɑjˀkl̩]; born 18 November 1963) is a Danish former professional footballer who played as a goalkeeper. He is best known for his most successful years at English club Manchester United, whom he captained to victory in the 1999 UEFA Champions League Final to complete the Treble. He also won the UEFA Euro 1992 with his country Denmark. Born in Gladsaxe, Copenhagen, Schmeichel was famous for his intimidating physique – at 1.91 m (6 ft 3 in) tall and weighing close to 100 kg (15 st 10 lb) during his playing days – and wore specially made size XXXL football shirts. A fierce competitor, he was known for his loud, unstinting criticism of perceived mistakes by his defenders. Unusually for a goalkeeper, Schmeichel scored 11 goals during his career, including one for the national team. He is also the most capped player for the Denmark national team, with 129 games between 1987 and 2001. In addition to Euro 92, he played for his country at the 1998 FIFA World Cup and three additional European Championship tournaments. He captained the national team in 30 matches. He also represented Gladsaxe-Hero, Hvidovre, Brøndby, Sporting CP, Aston Villa and Manchester City in a career that lasted from 1981 until 2003 and yielded 24 trophies. Regarded as one of the greatest goalkeepers of all-time, he was voted the IFFHS World's Best Goalkeeper in 1992 and 1993, and in 2000, the IFFHS also ranked Schmeichel among the top 10 goalkeepers of the 20th century. In 2001, Schmeichel won a public poll held by Reuters, in which the majority of the 200,000 participants voted him as the best goalkeeper ever, ahead of Lev Yashin and Gordon Banks. In 2003, Schmeichel was inducted into the English Football Hall of Fame in recognition of his impact on the English game. In March 2004, he was named as one of the "125 greatest living footballers", at the FIFA 100 celebrations. Schmeichel's popularity in Britain would extend to television, as on the Manchester-based soap opera Coronation Street, he is the namesake of a Great Dane formerly owned by Chesney Brown. His son, Kasper, is also a professional goalkeeper, currently playing for Premier League side Leicester City and the Danish national team. 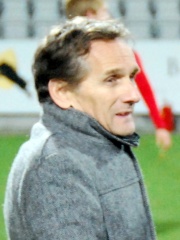 With an HPI of 69.34, Allan Simonsen is the 3rd most famous Danish Soccer Player.  His biography has been translated into 43 different languages.

Allan Rodenkam Simonsen (born 15 December 1952) is a Danish former footballer and manager. He most prominently played as a striker for German Bundesliga club Borussia Mönchengladbach, winning the 1975 and 1979 UEFA Cups, as well as for Barcelona from Spain, winning the 1982 Cup Winners' Cup. Simonsen is the only footballer to have scored in the European Cup, UEFA Cup, and Cup Winners' Cup finals. Simonsen was named 1977 European Footballer of the Year. For the Denmark national team, Simonsen was capped 55 times, scoring 20 goals. He represented Denmark at the 1972 Summer Olympics, 1984 European Championship and 1986 World Cup tournaments. He was voted into the Danish Football Hall of Fame in November 2008. 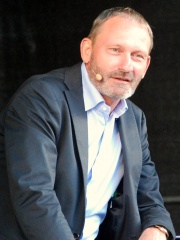 With an HPI of 66.38, Preben Elkjær is the 4th most famous Danish Soccer Player.  His biography has been translated into 32 different languages.

Preben Elkjær Larsen (Danish pronunciation: [ˈelˌkʰeˀɐ̯]; born 11 September 1957) is a Danish former professional footballer who played as a striker. Amongst others, he played with Hellas Verona in Italy, helping the club to the only major title of its history, the 1985 Serie A. Additionally, Elkjær scored 38 goals for the Denmark national team in 11 years, being a leading figure for the Danish side under coach Sepp Piontek that played at the Euro 1984 and the 1986 World Cup (a first-ever appearance), often hailed as the golden generation of Danish football by their countrymen. Elkjær won the Bronze Ball award at the latter competition. Widely regarded as one of the best forwards of the 1980s, Elkjær finished second in the Ballon d'Or awards in 1985, having been placed third the previous year, and going on to finish fourth in 1986. In Verona he is still remembered fondly, having earned the persisting nickname "Il sindaco" (the mayor) during his stint for the club. To this day, at least a few hundred voters in the city continue to write his name on their ballots at the mayoral elections. Renowned for his goal-scoring abilities and persona, he also remains one of the most popular sports personalities in his native Denmark. 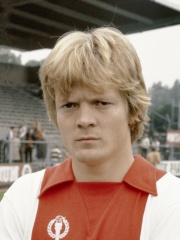 With an HPI of 64.47, Søren Lerby is the 5th most famous Danish Soccer Player.  His biography has been translated into 29 different languages.

Søren Lerby (born 1 February 1958) is a Danish former football player, manager, and licensed agent. As a player, he spent most of his career in Dutch football, winning five Eredivisie championships with Ajax Amsterdam and two with PSV Eindhoven. With the latter club, he also won the 1988 European Cup. He won two Bundesliga titles with Bayern Munich, and played one season for AS Monaco in France. He played 67 matches for the Denmark national football team from 1978 to 1989, and represented Denmark at the 1986 FIFA World Cup and two European Championship tournaments. Currently, he is the agent of Napoli winger Dries Mertens. 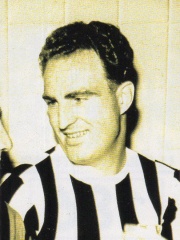 With an HPI of 63.60, John Hansen is the 6th most famous Danish Soccer Player.  His biography has been translated into 17 different languages.

John Angelo Valdemar Østergaard Hansen, known simply as John Hansen, (24 June 1924 – 12 January 1990) was a Danish footballer who played as a forward. He played professionally for seven years in Italy: he scored 124 goals in 187 matches for Juventus F.C., and won two Serie A championships with the club, finishing as Capocannoniere top-goal scorer in the 1951–52 Serie A season; he later also played for Italian club S.S. Lazio. He won the 1944 Danish championship with childhood club BK Frem. Hansen scored 10 goals in eight games for the Denmark national football team in 1948, and won a bronze medal with Denmark at the 1948 Summer Olympics. In 1985, Hansen received the Italian order of chivalry.He was the son of Danish international goalkeeper Niels Peder Hansen, who also played for BK Frem, and was the father of Henning Hansen, who played for BK Frem in the late 1960s and early 1970s. 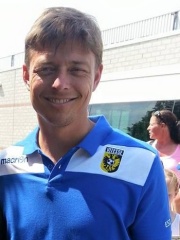 With an HPI of 63.46, Jon Dahl Tomasson is the 7th most famous Danish Soccer Player.  His biography has been translated into 43 different languages.

Jon Dahl Tomasson (Danish pronunciation: [ˈtsʰomæsʌn]; born 29 August 1976) is a Danish football manager and former player who is the current head coach of EFL Championship club Blackburn Rovers. A forward, his most notable run of football came in his first stint at Feyenoord, with whom he won the 2002 UEFA Cup, and Italian club AC Milan, with whom he won the UEFA Champions League in 2003 and reached the final in 2005. He also played top-flight football in England, Germany and Spain. He is the joint all-time top goalscorer for the Denmark national team with 52 goals in 112 games and was also honoured with the Danish Player of the Year award in both 2002 and 2004. He played at the UEFA European Championship in 2000 and 2004 and the FIFA World Cup in 2002 and 2010. After his playing career, Tomasson went into coaching, being both assistant and manager in the Netherlands, before becoming assistant manager in the Denmark national team under Åge Hareide. In 2020, Tomasson became the manager of Malmö FF and left two years later after winning the Swedish championship for two consecutive seasons. In June 2022 he signed a three-year deal at Blackburn Rovers. 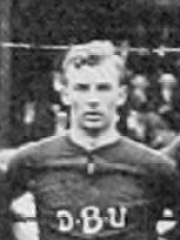 With an HPI of 63.42, Poul Nielsen is the 8th most famous Danish Soccer Player.  His biography has been translated into 21 different languages.

Niels Poul "Tist" Nielsen (25 December 1891 – 9 August 1962) was a Danish footballer who is the joint all-time best goalscorer for the Denmark national team with 52 goals in 38 matches. Nielsen won a silver medal with the national team at the 1912 Summer Olympics. He played his career as a striker for Kjøbenhavns Boldklub, with whom he won six Danish football championships. In Canada, he played for CNR Montréal, winning the Dominion of Canada Championship in 1929. 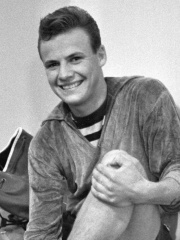 With an HPI of 63.21, Harald Nielsen is the 9th most famous Danish Soccer Player.  His biography has been translated into 22 different languages.

Harald Ingemann Nielsen (26 October 1941 – 11 August 2015) was a Danish footballer who played as a forward. He played professionally for Italian club Bologna F.C. where he was the league top scorer (capocannoniere) in Bologna's 1964 Serie A championship winning season. Harald Nielsen played 14 games for the Denmark national team in 1959 and 1960, scoring 15 goals, and he was known as Guld-Harald (Gold-Harald). He was a football entrepreneur having continuously worked for the professionalization of both the Danish national team and the national league. 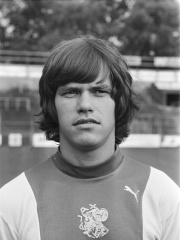 With an HPI of 62.54, Frank Arnesen is the 10th most famous Danish Soccer Player.  His biography has been translated into 27 different languages.

Frank Arnesen (born 30 September 1956) is a former Danish footballer and sporting director at Dutch football club Feyenoord. Arnesen was the Director of Football at English football clubs Tottenham Hotspur and Chelsea, and was Sporting Director at Hamburger SV, Metalist Kharkiv and PAOK FC. As a player, he most notably played with Dutch clubs Ajax and PSV Eindhoven, winning the 1988 European Cup with PSV. Arnesen was capped 52 times and scored 14 goals for the Danish national team, and participated in the Euro 1984 and 1986 FIFA World Cup tournaments.

Which Soccer Players were alive at the same time? This visualization shows the lifespans of the 12 most globally memorable Soccer Players since 1700.